Mystics and visionaries in the world today 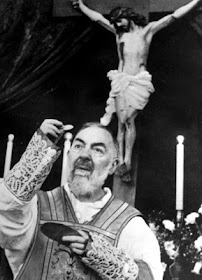 Some might ask if there are authentic mystics, visionaries and prophets in the world today? Judging by history the answer would have to be a most resounding “yes”. Beginning in the Old Testament, we see the holy Prophets arise, inspired by the Holy Spirit to enlighten God’s people, and to reveal and set forth God’s laws. And throughout the centuries, we see the Catholic Church inspired and strengthened by Her holy mystic Saints and visionaries, who by the express will of God, become extraodinary instruments in His hands and special “channels” for the Holy Spirit.

Mystics and Visionaries as specially chosen souls have a variety of missions within the Church such as:
-they inspire devotions like the Sacred Heart and Divine Mercy devotions;
-through their lives as victim souls they make reparation to God for the conversion of sinners, and remind us to make sacrifices and do penance;
-they enlighten us concerning the evils of the world and reveal to us the horrors of sin.
-through their sufferings willingly accepted and offered to God, they remind us of our call to participate in the redemption of all of humanity through the offering of our own sacrifices, and through our sufferings willingly accepted.

In the book “Mystics of the Church” by Evelyn Underhill, we see that no century has been without its Mystics throughout the history of the Church. And certainly our most recent century has been enriched by some of the most extraordinary Mystics in the history of the Church, such as St (Padre) Pio (1887-1968)—the first Priest confirmed to have had the sacred Stigmata, St Faustina Kowalska (1905-1938) of the Divine Mercy devotion, and the extraordinary lay Mystic and Stigmatic, St Gemma Galgani (1878-1903), just to name a few.

There are certainly a good number of persons in the the world today who are said to be mystics, and to a much lesser extent, there are a number of persons who are said to be stigmatics. The difficulty of course lies in the discernment as to whether a mystic or visionary is authentic or not. It is of course much easier for the Church (i.e. - normally the local Bishop) to discern the authenticity of a mystic after their death, thus being able to discern and judge their entire life and the presence (or absence) of heroic virtues.

Apart from any glaring theological errors, the Church normally does not make any judgments until after their death, and even then, a good number of them are never formally investigated by the Church.

The spiritual dangers of false mystics and visionaries
Although on the one hand Scripture states that we are not to despise prophecy, on the other hand the Church and the Saints advise us to be extremely careful and prudent in such matters, because perhaps more often than not, the origins of some alleged mystical graces can in reality be the devil in disguise. The extraordinary Mystic St Paul of the Cross says that for every 100 persons said to be mystics; there is perhaps only one or two that are truly authentic and inspired by God. -And this is coming from someone who was not only an extraordinary Saint and religious founder, but who himself was a authentic Mystic! Certainly we should heed his wise advice.

We need to remember that the devil does not counterfeit copper or tin, but only gold. And all that glitters is not necessarily gold. Just because a visionary encourages such things as Eucharistic devotion, the Rosary, Confession etc, this does not mean they are authentic mystics. After all, the devil does not appear with horns and cloven hooves suggesting that we follow or imitate him. If he showed himself the devil, who would follow or be inspired by him? He is the deceiver, and his deceptions are oh so very subtle. Let us not pride ourselves into thinking that we are wiser than the demon by making ourselves judges and entrusting our spiritual lives to own poor judgment.

Little by little, a false visionary or mystic will very subtly, almost imperceptibly, introduce false devotions and doctrines, which on the surface seem logical and spiritual, but really are a means to instill spiritual pride in those affected, by thinking that they have “additional” knowledge that other Catholics do not have, and/or by reciting special prayers and practicing special acts of devotion that other Catholics do not know of, thinking that they are specially graced through their association with the alleged mystic or visionary, and through the additional knowledge, prayers and acts of devotion that are not known or practiced by other Catholics. Once this spiritual pride takes root, then sooner or later comes spiritual disobedience to the Church, that is, usually the local Bishop, who will often test the spirit of the mystic by conveying certain sanctions upon the mystic and the followers, to see if they submit in obedience their alleged graces to the Church.

My experiences with alleged mystics and the lessons learned
I have personally met two different alleged mystics, both of whom were very well known; in one case the mystic had hundreds of followers, and in the other case several thousands of followers. By “followers” I mean those who are closely associated with the mystic or visionary. I did not seek them out; they were placed in my path in life. However, BOTH of the mystics that I have met have since received negative judgments by their local Bishops, and both have been formally sanctioned by the local Bishop, and additionally the Vatican has confirmed the negative decisions of the Bishops in both cases. The followers of one of the mystics have been formally sanctioned by the Vatican, and in the other case the Vatican issued a letter of recognition concerning the Bishops negative decision. As explained elsewhere on this website, it is the local Bishop who alone (under most circumstances) has the authority to judge the validity and authenticity of a mystic, visionary or any kind of private revelation occurring within his diocese. In both circumstances, a good number of souls have continued to follow these two alleged mystics, even though the local Bishop and the Vatican has declared and recognised negative judgements concerning them.

So, in such circumstances, the question then is: "Is a person who knowingly and willingly disregards the sanctions and judgements of the Church (ie-local Bishop and/or Rome) still a Catholic?" I will let you, the reader, come to your own conclusion.

Obedience is the “Litmus Test” of the Church
It is through obedience, or the lack thereof, that a true mystic and can be distinguished from a false one. An authentic mystic will always obey the legitimate Church authority, be that a Priest-Spiritual Director, a Confessor, a local religious Superior, and most especially the local Bishop. Obedience has always been the litmus test that the Church uses to test and judge a mystic or visionary.

False mystics often defer to a “higher authority”
In their disobedience or disregard to the local Bishop or legitimate Church authority, a false visionary or mystic and their followers will often defer to a “higher authority” to justify their disobedience. For example, in disregarding the local Bishop decisions they will state that they “obey Rome”, but later when the Vatican confirms the sanctions and decisions of the local Bishop, the mystic and their followers will then say “we obey God, rather than man” , thereby placing themselves not only outside of the judgement of the Church, but in reality outside of the Church itself through their formal disobedience. And there we have the all too common danger of being led astray by a false mystic.

And so with these suggestions and guidelines in mind, we can hopefully better approach with proper discernment and prudence the modern day Mystics that may come into our lives.

For a further and more in depth discussion on judging mystics and private revelations see:
http://www.mysticsofthechurch.com/2009/11/obedience-to-catholic-church-judging.html


"Satan can even clothe himself in a cloak of humility, but he does not know how to wear the cloak of obedience." (Diary of St Faustina, par. 939).
Share